Once upon at time, in a country far, far away – New York in 1978 and 1979 to be precise – Desmond Child & Rouge made two of the best records in rock history. Two records hardly anyone have heard. Which is ironic, because everyone has heard Child’s later songs, though few know who wrote them.

How about Crazy, Angel or Dude (Looks Like a Lady) by Aerosmith? Or You Give Love a Bad Name, Livin’ On a Prayer, Bad Medicine or Keep the Faith by Bon Jovi? Or Cher’s Just Like Jesse James? Or Alice Cooper’s Poison, Bed of Nails or Trash?

Desmond Child wrote – or co-wrote – all of them. Just like I Was Made For Loving You – a Kiss-tune you may have heard ... And Robbie Williams’ Old Before I Die. And a bunch of songs for people like Michael Bolton, Scorpions, Ratt andMeat Loaf.

Your first thought may be “damn, the man must be rich”. He probably is. (There’s more, by the way. Wikipedia has a list of Child-songs.) Your second thought may be “man, that’s a dreadful list of songs”. It isn’t. Though even I must confess some of them aren’t among my favourites. (The Bon Jovi ones are, though.) Your third thought may be “isn’t that really a rather curious list. I mean Aerosmith and Ricky Martin ...”. Now we’re getting somewhere.

To make sense of it all, we must go back to the beginning – the two records Child made with the three lovely ladies that was Rouge – Maria Vidal, Diana Grasselli and Myriam Valle. 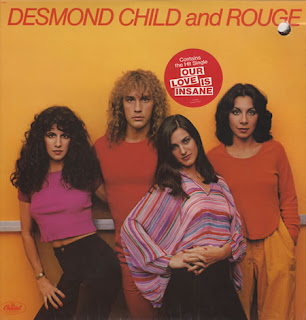 The first, self-titled record, is a strange mix of latino, rock, soul, glam and disco. From the first bars of Westside Pow Wow (co-written with a certain Paul Stanley) it is clear that this is something completely different. It is youthful music, hopeful, but still with a dark edge.

Because the year was 1978. And Desmond and the girls made urban music. And urban American youth culture of the late 70s was steeped in an apocalyptic vision of street fighting gangs and mindless violence.

Four years had passed since Charles Bronson cleared the streets in Death Wish. In 1979 Walter Hill released The Warriors, one of the truly great gang movies – with a Desmond Child-song on the soundtrack. Of course.

Still, though life on the streets was mean, there was hope to be found in love, sex (Lazy Love is one of the greatest songs about sex ever made), music and dance.

As a friend of mine sums up the band (referring to their second album): “If you can imagine the east coast "Rumours", "Bat out of Hell" without the cheese, or "Born to Run2" arranged and performed by the cast of "Fame" and like the idea, get this album.”

The first album is the cast of Fame recording Springsteen’s Greetings From Asbury Park, NJ. (Though the most Springsteenish of his songs is Last Of An Ancient Breed, from the Warriors Soundtrack.)

Here's Our Love Is Insane, that was a huge hit in New York:

The East Coast aspect is important. Desmond Child & Rouge recorded the sound of New York, but their roots were in Miami. And they were steeped in the sound that separates the east coast from the west: latino.

You really can’t understand American 70’ east coast music – especially New York music – without understanding the influence of latino. Artists like Billy Joel and Paul Simon were deeply influenced by it. As was Bruce Springsteen. And Desmond Child.

In Child & Rouge’s music it is more than an influence though – it is a corner stone. Both in rockers like City in Heat and Fight, and in ballads like Main Man (later recorded by Cher) and Our Love is Insane, the latin element is paramount.

And this is where the confusing aspect of the list above is explained. Child’s song writing career is based on two fundamentals: catchy, glam-influenced rock and disco-tinged latino. It may be mostly rock, as in the songs for Alice Cooper or Aerosmith (or Joan Jett, for whom he has written some great songs), or it may be nearly all latino, as in the songs for Ricky Martin, but none of the elements are ever entirely gone from his songs.

Glam, disco, latino … There seems to be a theme here. It all sounds a bit … camp, doesn’t it?

One of the reasons the first album is a happy one, is that Child himself was happy. He was in love – living with Maria Vidal. But still … something was wrong. Just like the joyfulness of that first record somehow comes across as rather sad.


Runners In The Night 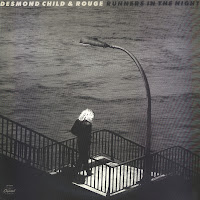 In 1979 Runners In The Night was released – and a lot was different.

This is one of the great reflections of a decade coming to an end – and coming to terms with the fact that the party is over and the rest of life is ahead of you.

For Desmond Child that meant coming to terms with the fact that his relationship to Vidal was ending – and accepting the fact that he was homosexual. To quote his own liner notes to the re-release:


Desmond Child & Rouge was on top of the world … then fear and doubt set in and everything seemed wrong. Our management, our label, our producer, our music and tragically … each other. That’s what ‘Runners In The Night’ was all about

The result is a dark and moody record, edgy and operatic, less disco, more pure rock. And, considering the youthfulness of the first record, it is surprisingly mature. It is as if they went from young and innocent to old and weary within a year.

Loss of love and security is it’s main subject, as in the beautiful Scared To Live: "But I'm more scared to live/than I am to die ..." But the record is more than the sound of a relationship coming to an end – it is the sound of a man coming to the end of one life, being at the beginning of a quite different one. Of identity shattered and, slowly, rebuilt.

Like Fleetwood Mac’s Rumours or Eagles’ Hotel California, it is a record steeped in sadness – the sadness of eras coming to their end. For Eagles and Mac it was the end of an era of excess and hope. The end of California Dreamin’. Their records signal the coming of lethargy and decay as the last vestiges of hippie culture disappeared in substance abuse and the loss of ideals and friends.

As the post hippie dream of the 70s lay dying, Desmond Child & Rouge made music for the kids that never even dreamed of being part of that world. There is, deep down in their two records, a punk ethos shining through.

And, while for Eagles and Fleetwood Mac their time of creative greatness was coming to an end, for Desmond Child the future lay ahead.

For Child that meant the end of what could – and should – have been a great career as a performer – though he would return with the not entirely satisfying solo record Discipline in 1991.

He went on to become one of the greatest song writers of the 8os and early 90s, whose songs define the period, but all along he must have been aware that he had known true greatness.

Runners In The Night isn’t just a great record. It is one of the truly great ones. In its dark desperation it captures the spirit of its age better than any other. It is undoubtedly camp, but it’s high camp, camp in the cause of art.

It is the sound of life being lived, the greatest thing popular music can achieve – and only rarely does. I’m not sure I consider it one of the five best records ever made, but it is no doubt among the ten.

As I finished one of those reviews: "Desmond Child went on, if not to greater things, then to greater hits. Though some of it is very good indeed, nothing has ever sounded quite this wonderful. But then again, not much does."