The vampire as victim

Or: It’s terribly sad, but I have to kill you. Boo hoo!


Roughly speaking, the history of the vampire can be divided into three parts. First there is the traditional vampire. It is essentially a dangerous ghost – though one put to a few rather different jobs, from cheap horror story scare to a desperate way to explain the sudden and unexpected death of lots of people. 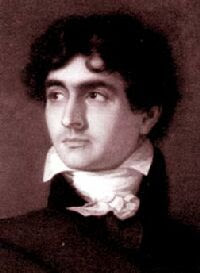 Secondly there is the polidorian vampire, that enters the stage with the publication of John Polidori’s (left) The Vampyre in 1819. Though for my purpose it also includes the demon lover vampire figure in the earlier stories and poems by people like Johan Ludwig Tieck, Goethe and Coleridge: It is an evil, demonic character that deprives good people of their life and (what is worse) their salvation.

This is the vampire that, with variations of course, is dominant until Anne Rice releases Interview With The Vampire in 1976. The book heralds the coming of the third, modern vampire: The vampire as protagonist. To a large extent it is related to the polidorian one, the difference is that we are invited to empathize – or even sympathize – with it.

These days we are seeing a new transformation of this type of vampire: It is becoming a victim. No longer are we simply invited to identify with the problems of the daily vampirical existence. We are asked to feel sorry for it.

This development is a logical conclusion of a development that started with Anne Rice’s Interview: Because when the vampire becomes the protagonist (or a close ally of the protagonist) only a short step is necessary to see it as a victim. Because if we are to take it serious as something more than a demonic character, it clearly is both an abuser and a victim.

It is an abuser – a murderer even – because other, living, people must give up their blood (and mostly their life) for it to “live”. But once it was a human being and this being was (again mostly) made a vampire because it was a victim of an attack by another vampire.

The vampire can be seen as a victim in two senses: Because it is an addict and simply because it is a vampire.


The vampire as addict

In the South Korean movie Thirst, a priest becomes a vampire – a very introspective and ethical vampire. But he makes his lover a vampire too, and she is anything but introspective or ethical: She is a jolly vampire, a vampire that enjoys her vampirical existence to the full. She is having the time of her … ehr … afterlife. She is, in other words, a lunatic killer – a vampire that kills for food, but also simply because she can. She is lost anyway, so why not enjoy the ride? 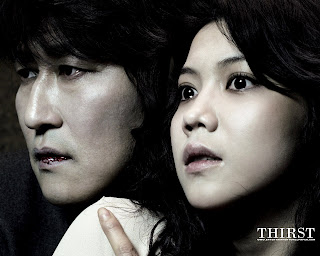 Hers is an impossible existence. A vampire that fully enjoys “life” is simply too dangerous to exist. She has to die.

Thirst is a movie about the impossibility of being such a jolly vampire. Vampires can only exist, it tells us, if they keep in the shadows and do not prey excessively. Yes, they have to kill us. The good vamp in Thirst sets up a euthanasia practice – draining people who want to die anyway.

The point is this: The vampire as metaphor for liberation – one that is being heavily promoted in modern vampire literature – is absurd. The vampire is anything but free. It is a slave to it’s own needs. It may skulk in the shadows and get by on the occasional kill, but it is absolutely not free. It is an addict.

The vampire is not simply addicted, as an alcoholic or a drug addict desperately needs his drink or her fix. Its addiction runs deeper – because it is fatal. Without blood, it will die. This makes it the perfect metaphor of drug addiction as many see it: The moment you are “addicted” you are lost. 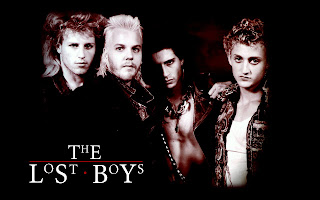 For the vampire there is no way out. Except through death, of course. It is best seen in my perhaps favourite vampire movie: Lost Boys (or “The Just Say No”-movie, as I sometimes call it).

Lost Boys is a schizophrenic movie indeed: The vampires in the movie are the cool guys (being fought by nerds), who “sleep all day, party all night, never grow old and never die”. But they have to feeeeeeeeeed. And that makes them, after all, the bad guys. Cool, but bad. And always “the others”. To become one of them is to be lost. They are, as the title says, Lost Boys.

When they finally die (for instance by being burned to death in a bath tub filled with holy water), they revert from grown, cool men into innocent boys. In death, they are once again human.

Being addicts, it is in this day and age natural to focus on vampires as victims. And they are the perfect victims, as they cannot stop being addicts. There is (outside of Terry Pratchett’s books) no Anonymous Bloodsuckers, for those who want to overcome their addiction. It can’t be done. There is no point in talking about personal responsibility. They either feed, or they die. (Though some try to solve this through the introduction of fake blood. Booooooooooooooring.)


The vampire as victim of abuse

But there is also another sense in which vampires are victims: They are victims merely through being vampires. Or rather: Through having been made vampires.

If we accept the premise that being a vampire is a bad thing – you do, after all, have to cause other people’s deaths to stay alive – then being made a vampire must be considered a rather extreme kind of abuse. And every vampire has at some point in its history been made. Which means that the lot of them are abuse victims.

The one exception to this rule, are vampires like the woman in Thirst: She is made a vampire at the point of dying. Making her a vampire is a way for her lover to “save” her life (and boy, does he regret). 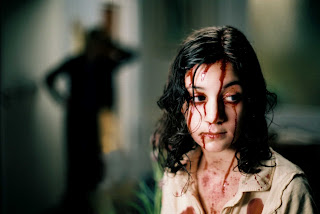 The book (and movie) that takes both these concepts of victimhood the furthest is the Swedish Let The Right One In, where Eli is both a victim of vampiric violence and abuse and very obviously an addict. She is a killer, but argues that she is not any different than the rest of us: She simply does what she has to in order to stay alive. Wouldn’t we all?

Like the female vampire in Thirst, Eli's existence is an impossible one. You simply cannot kill that many people in a fairly small area and expect to get away with it. She has to stay on the run more or less constantly.

And in contrast to the many who see the ending Let The Right One In as a happy one, I consider it very, very sad. Young Oskar may have escaped the dreads of Suburbia. He may have risen above the victimhood that seemed his destiny. But the price he pays is simply too high: A future as the sidekick of a brutal killer – one who has to kill to stay alive. He may have escaped a grey and depressing life, but at the price of his very humanity. 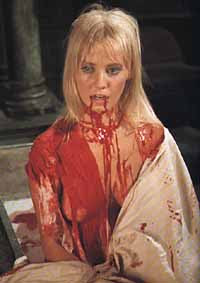 The absurdity of it all

And here we approach the absurdity of seeing the vampire as a victim. It is no point in feeling sorry for the vampire, even if what brought them to their present situation was a road of pain and hurt. Because even if it is a victim, it is also by nature (or un-nature, if you prefer) a killer. People must die for it to stay alive. Others may murder for them, but they are still, essentially, responsible for their deaths.

In my neo-reactionary view of the world, this is where the vampire teaches us something about ourselves. We may all be victims, one way or another. But we are still responsible for our actions. We may have reasons for hurting others, reasons related to our own claims for victimhood, but we are still hurting them. It is still wrong.

All of this is of course a fairly ridiculous line of reasoning. Vampires don’t actually exist. They are figments of imagination.

True enough, but entertainment – even slightly arty entertainment, like True Blood – tells us something about ourselves. Because entertainment, unlike art, appeals to what we hold dear, rather than, like art, challenging our view of the world. And what we seem to find entertaining these days, is to feel sorry for the vampire. They are the ultimate bad guys, but, we seem to ask ourselves, maybe – just maybe – they are redeemable after all.

This is absurd. Vampires are what the Victorians thought them to be: Demonic murderers. We may no longer fear that they will cost us our salvation and eternal life – which was the real horror of the 19th century vampire – but they want our blood. No, more than that, they need our blood.

There is just one thing to do. We must bring out the hammers and stakes. We must light the pyre. We must defend ourselves. Don’t believe them when they tell you vampires are really rather good guys who have had bad press. They are only softening you up for the kill!

Arnfinn Pettersen is a Norwegian editor, blogger, folklorist and vampirologist. He has written a Norwegian book about vampires in tradition and litterature. He is also the editor of the blog magazine Knokkelklang (Jingle Bones), where this article is published.
_____